The story behind my small vignette is as follows. The Jaguar has just landed after completing one of its test flights, all of which took place at Muroc Dry Lake (adjacent to Edwards Air Force Base). A minor problem has developed during the flight (which, according to the pilot, Mr. Corwin Meyer, was entirely normal for the Jaguar – see source [1]), resulting in the aircraft coming to rest slightly further from the usual place. A member of the ground crew nearest to the spot has immediately driven up and is asking the pilot whether any help is required (a tow tractor to the apron, perhaps?). 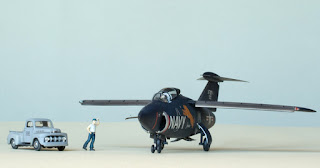 2. Kit Overview
The XF10F-1 Jaguar from Planet Models (cat. # 171) is a fully resin kit; it comes with a vacu-formed canopy and a set of landing gear legs made of "strengthened" resin. The quality of casting is good, although the fuselage halves of my sample were slightly warped. The resin parts have smooth surface with recessed panel lines which are a bit too deep, but still passable.

The kit presents the XF10F-1 Jaguar in its initial configuration – i.e., original free-floating horizontal stabilizer is in place (swapped for a conventional one prior to the 29th flight), there are no horizontal ventral fins and no speed brakes on the aft fuselage (installed prior to the 17th flight). Keeping this in mind, the accuracy of the kit can be assessed as more or less acceptable out of the box. The cockpit detail is not bad, but the wheel wells are bare. A number of small details seen on the real XF10F-1 are missing, such as T-shaped probes and vertical strakes on the lower forward fuselage. However, the most important issue is the leading edge slats. When the Jaguar is on the ground, its wing is always (at least on all available historical photographs) in the takeoff and landing position, meaning the minimum sweep. And in the minimum sweep position the leading edge slats extend automatically. The kit's wings have no separate slats (which is, alas, true for so many other decent model kits).

There is one other grudge. The manufacturer could have given more thought to the question of joining the kit parts together. The way to glue the wings to the fuselage that the manual suggests is simply unworkable. 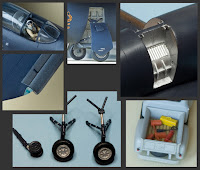 Instead of following the unfeasible recommendation on the manufacturer's instruction sheet, I joined all major parts of the model – the fuselage, the wings, the vertical fin and the horizontal stabilator - by means of drilling holes and inserting metal reinforcing rods.

3.2. Painting & Markings
Painting and markings have been done after careful study of historical photographs from the source [1]. The paint job is relatively straightforward: the aircraft is Dark Sea Blue overall with a number of natural metal items (intake lips; wing, vertical fin and stabilator leading edges; wheel wells; landing gear door interior surfaces; mail wheels; pitot tube).
The decal provided in the box is good in quality. It is mostly accurate in regards to the larger items, but less so in regards to various small stencilling. There is one issue, however: contrary to the Planet Models' instruction, the real XF10F-1 did not have the "NAVY" lettering on the upper right wing. There is at least one historic photograph proving this (see the source [1], page 20); I might also add that this conforms to the Navy's standard practice. Most of the Jaguar models on the Internet are inaccurate in this regard, which is a shame. Modellers should pay more attention to historic photographs, less to model kit manufacturers' recommendations. 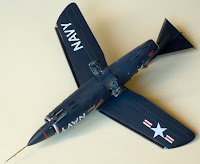 3.3. Presentation
I am always trying to present an aircraft in its most typical surroundings. For the short-loved XF10F-1 this is definitely the Muroc Dry Lake. The dry lake bed is flat, so my diorama base is just a sheet of plastic which is painted accordingly. It must be noted here that the dry lake bed is a very special surface and is unlike to the sand you see on a beach or in a desert. In normal conditions the dry lake bed is very firm, so that aircraft and vehicles do not bog down, and neither do they generate the clouds of dust when rolling (see some photographs here: photo1, photo2, photo3).

As my Jaguar is in a "just landed" situation, I needed a pilot in the cockpit. My figure came from the set # 721120 produced by PJ Productions. The pilot's equipment is more or less accurate for the early post-war years; I only had to reshape the footwear of the PJ's figure, as the Navy pilots wore neat leather shoes and not some shapeless stuff molded by PJ.

The rather generic ground crewmen figure came from Italeri's "NATO Pilots and Ground Crew" set # 1246 (actually, it is my home-made customized resin copy since the original Italeri figures are made from polyethylene which is unworkable from the modelling perspective).


The pickup truck model represents a 1951 Ford F-1 (kit # 7020 manufactured by F4Models); it is painted Ocean Grey which was one of the standard colours used for the Navy ground support vehicles at that time. Here is a photographic proof (link) that Ford F-1 pickup trucks were indeed operated by the U.S. Navy.

5. Notes
You can often see modellers declare that they won't build resin model kits, implying that resin is the reason for that self-abstention. They list a variety of reasons; one of those reasons is that supposedly the resin kits would warp and deform with time. Well, I have completed this model of the XF10F-1 Jaguar in November 2015; now it is November 2019. Exactly four years have passed, and the three landing gear legs, made entirely from resin (no metal inside them), that support the weight of the full-resin model, show no sign of deformation. The whole model today looks exactly the same as when it was finished.