1.2. Story
An F4D-1 Skyray of All Weather Fighter Squadron Three is being prepared for a routine air patrol from the Naval Air Station North Island. Ground crewmen are arming the fighter with Sidewinder air-to-air missiles delivered on a munitions trailer towed by a Clarktor tractor. A gas turbine aircraft start unit is standing by, ready to start the Skyray's engine.

2. Kit Overview
The Skyray kit by Tamiya is well-known and has been reviewed many times. In my view, it is an outstanding kit. The overall accuracy and the quality of moulds are exceptional. The fine surface details as well as interior details are better than on many newer kits released in the 2010s.

Yet, the kit is not perfect. If your aim is to have an accurately looking Skyray, the following issues have to be addressed:
1) A curious feature of the Skyray design is its leading edge slats. They are entirely automatic and are controlled solely by aerodynamic forces. There are no provisions for the pilot to control these slats in any way; he can neither extend nor retract them. The slats automatically extend (fall down due to gravity) when the airplane slows down for landing, they remain extended on the ground and throughout the takeoff, and then they automatically retract when the airplane reaches a certain airspeed (and the windage overpowers the gravity). Ground crews may manually retract the slats when a particular Skyray is undergoing some maintenance, is slotted for a long-time storage or for receiving a paint job. Any scale model that is intended to represent an operational Skyray ready for takeoff must have the leading edge slats extended. However, the Tamiya's kit has the leading edge slats molded shut.
2) Another curious feature of this airplane is its grotesque horizontal (pitch) trimmers. They are mechanically controlled by the pilot, and they had to be in an upward position for both takeoff and landing. Skyray pilots rarely bothered to lower the trimmers (that had to be done by means of hand-turning a wheel in the cockpit) upon landing only to be obliged to raise the same trimmers again prior to takeoff. Thus, an operational Skyray, on the flight deck or on the ground, is normally seen with the pitch trimmers tilted upwards. However, the Tamiya's kit has these trimmers molded in the neutral position.

Air brakes are left closed, of course, as it should be on a parked Skyray (air brakes are designed to be used when an aircraft is airborne so as to facilitate weapon delivery, combat air maneuvering or landing; the Skyray's air brakes do not extend on their own accord and therefore are closed on a parked aircraft). 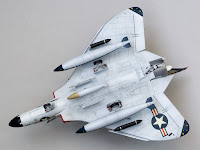 In regards to the weapons and external stores:
7) Pilot accounts (see source [2]) and historical photographs consistently point on the following fact: the Skyrays of VF(AW)-3 had their guns removed and gun troughs faired over. I have modified my model accordingly.
8) The kit includes rocket launchers which, judging by their dimensions, appear to be 19-shot LAU-3 pods. However, all available historical photographs of VF(AW)-3 Skyrays show that much smaller 7-shot LAU-68 pods were typically employed by this particular unit rather than the 19-shot variants. Lacking any out of the box LAU-68 rocket pods, I had to scratch-build two such items.
9) Sidewinder missile pylons were enhanced with some custom-made photo-etched details.
10) Two AIM-9B Sidewinder missiles came from an excellent set produced by Eduard (# 672036). To each of the missiles I have added an umbilical cord (which is highly visible on any Sidewinder variant) and a simple scratch-built protective cap. If your model shows an aircraft that is not yet preparing for takeoff with the pilot in the cockpit, than the extremely delicate IR heads of the Sidewinders must be covered by protective caps. The Eduard's set includes protective caps, but they are of a later variety than those used in the late 1950s and early 1960s.
11) Historical photographs of the VF(AW)-3 Skyrays show that they always carry a NavPac pod (containing VHF navigation and instrument approach marker radio and antennae) on the centerline pylon. The kit's NavPac is accurate and I used it without any modifications.
12) VF(AW)-3 Skyrays were never seen without the two 300-gallon external fuel tanks. The kit's drop tanks are accurate enough in terms of both shape and dimensions (about 1mm too long, if we reference the diagram provided by Tommy H. Thomason here). 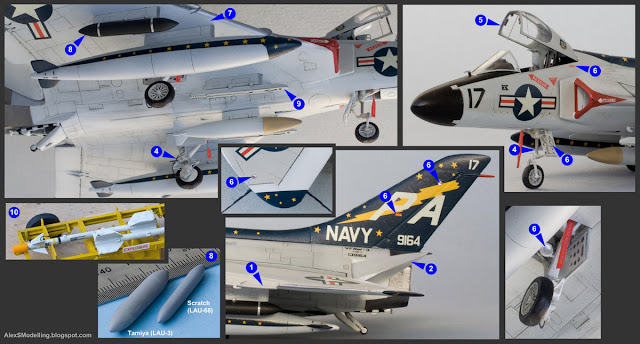 Some words should be said about the Skyray detail set produced by CMK (# 7016). In my opinion, it is not a good value for money. I believe that the only useful parts in this set are the resin extended slats, horizontal trimmers and photo-etched items, which should have been made available as a smaller (and cheaper) detail set. As for the other parts in this set,
- Resin main landing gear wells fit inside the kit's wings with considerable difficulty. When the model is complete, less than 30% of the wells are seen as the larger sections of both nose and main landing gear doors are closed at all times except when the gear is in the process of raising or lowering.
- Resin nose landing gear well does not fit inside the kit's fuselage even when combined with the kit's plastic cockpit tub; forget trying to combine it with the CMK's resin cockpit tub.
- Neither the resin cockpit tub nor the resin ejection seat offer any considerable improvement in terms of shape or detail when compared to the respective plastic parts.
- Separately cast resin ailerons are unnecessary, as a parked Skyray typically has its ailerons in the neutral position. Furthermore, installing the resin items will ruin the control rods which are excellently cast by Tamiya on the plastic wing surface.
- Separately cast resin rudder is nice; on the other hand, sawing off the rudder from the respective plastic part is easy (at least when compared to making the CMK's resin parts fit).
- Resin engine access panel is less detailed than the kit's plastic. Furthermore, this is not the panel that is frequently seen open on the real Skyrays undergoing pre-flight checks; presenting it open would only appeal to the modellers obsessed with finishing their kits as partially disassembled airplanes.
- CMK's vacu-formed canopy does not bring any improvement in either shape or transparency when compared to the Tamiya's excellent plastic canopy.
- CMK's radar and separate nose cone are nice, but I do not like the way the removed nose cone breaks the neat silhouette of the airplane.

3.2. Painting & Markings
The aircraft carriers the standard Light Gull Grey over Insignia White camouflage scheme of the period. Miscellaneous markings are all done in accordance with historical photographs and include, among others, aluminum-colored wing leading edge and ordnance pylon leading edges; black radome and anti-glare panel; dark green rocket pods; dirty tan nose cone of the NavPac pod (the natural color of fiberglass).
I have to note that Tamiya's instructions in regards to painting and markings are quite accurate, in contrast with instructions concocted by some other kit manufacturers, but still some aspects are omitted there, e.g. aluminum leading edges on ordnance pylons and dark blue drop tank fins. Also note that operational Skyrays, unlike most of the contemporary Naval aircraft types, had neither the leading edge slats interior nor the landing gear door edges painted Insignia Red.
The kit's decals are used, although I had to re-paint the wing walkways as the ones provided on the decal sheet have an unrealistically yellowish hue. 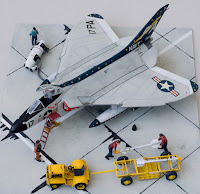 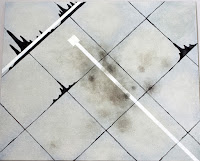 3.3. Presentation
I used this historical photograph as an inspiration for my diorama and assembled the ground support equipment and crew figures accordingly.
1) The diorama base is sheet plastic, painted by myself in accordance with historical photographs of the VF(AW)-3 Skyrays seen on the ramp of NAS North Island. It's not some pre-painted generic cardboard. And, yes, the black lines between the concrete panels are wavy (exactly as they are on historical photographs) because in the past such seams were filled with tar by hand.
2) Ground crew and pilot figures came from Hasegawa (# X72-7) and Airfix (# 1748) sets. As in my earlier works, I had to alter the crew's uniform and headgear to make them Navy rather than Air Force guys (how frustrated I am to see all kit manufacturers stubbornly producing crew figures in the Air Force attire, while no figures are available to represent non-modern U.S. Navy crews).
3) The U.S. Navy munitions trailer, adapted to carry Sidewinder missiles and rocket pods, was scratch-built basing on historical photographs.
4) The model of air-transportable aircraft start unit, a very typical companion of Skyrays on land bases, is built from the kit produced by F4Models (cat. # 7019).
5) The Clarktor 6 tractor was widely used by the U.S. Navy on both aircraft carriers and land bases. Its model comes from the Academy's set # 13403, and it was heavily modified by me to achieve better accuracy. For more details see my article about carrier-based tractors.
6) The Skyray was one of the very few Navy airplanes lacking the self-boarding capability. Therefore, external access ladders were always needed for the crew to get to their cockpits (e.g. see this historical photograph). The ladder on my vignette is a small photo-etched item from F4Models (# 7014).