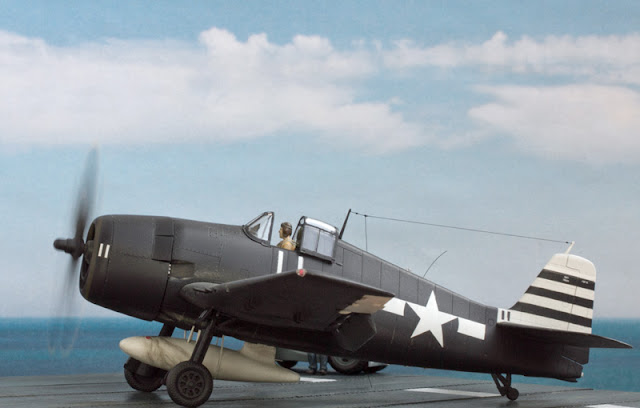 1.2. Story
The story behind my small vignette is very simple. The Hellcat, ready for a routine combat air patrol mission, starts taxiing to the launch position on the USS Randolph's deck. Flight deck crewmen wave to the pilot and wish him good luck, while leaning on a Ford tow tractor.

2. Kit Overview
Eduard's # 7077 Hellcat is a well-known kit and has been reviewed many times. Here are just two examples of fairly detailed reviews for this kit: link and link.

The engine and cockpit details are very good for the scale; I wish other manufacturers provide us with something on par. I must also commend Eduard on the perfectly engineered way the wings and the horizontal stabilizers are attached to the fuselage: no seams are visible, no putty is required. On the other hand, the drop tank is the "low point" of the kit: its engineering (section of the tank moulded as one piece with two of its supports; halves of braces moulded onto the tank body) leaves no space to avoid visible seams and forces one to scratch-build the whole drop tank bracing arrangement.

3. Construction
3.1. Building
As my model was indented to be presented as taxiing to take off, a couple of important changes had to be made:
1) Wing flaps had to be lowered, which was done with the help of a resin detail set produced by RES-IM.
2) Cowl flaps had to be shown in the fully open position.

Additionally, I made the following enhancements:
3) Scratch-built clear wingtip and fuselage navigation lights, landing light and recognition lights.
4) Engine exhaust pipes scratch-built from thin metal tubes (syringe needles).
5) Metal machine gun barrels manufactured by Master-Model.
6) Main landing gear doors are way too thick; I replaced them with the resin items manufactured by Quickboost.
7) Some detailing added to the main landing gear legs, including brake line imitation.
8) Tail landing gear door is incorrect in the kit and was replaced with a scratch-built one.
9) Various small scratch-built items, including rocket pylons, catapult bridle hooks, aerial, support struts and braces for the drop tank as well as its filler cap.

3.2. Painting & Markings
The Eduard's kit offers good decals. However, I shunned the "toothy grin" VF-27 variant because this is how 99% of Hellcat kits on the Internet are finished; as for the three other variants, I am simply not attracted to "named" planes belonging to famous people.

As a prototype for my model I wanted an F6F-5 covered by good historical photographs, with some hopefully in colour. These criteria are met by the VF-12 / VBF-12 Hellcats from the USS Randolph, and this is the variant that I selected. Among other things, available historical photographs of the Randolph's Hellcats show that their drop tanks were white, their tires had diamond tread, the wings had rocket pylons installed and the fuselage sides were heavily stained.

The paint job is relatively straightforward: the aircraft is Sea Blue overall, the drop tank and the markings are Insignia White. When doing engine exhaust stains one has to remember that they were very light grey (or even off-white) on the Navy's dark blue World War II aircraft (see some period photographs here: link, link).

3.3. Presentation
For me, the presentation of this model was defined by two pre-requisites. Firstly, I wanted to show my Hellcat in its natural habitat, i.e. on a carrier deck. Secondly, I did not want to fold the wing. These conditions leave you with only three options: the aircraft must be either launching or taxiing to launch or landing. I chose the taxiing to launch scenario for my vignette.

This scenario, of course, requires a pilot present in the cockpit. The choice of seated pilot figures is extremely limited in my scale; in fact, I could find (as of early 2015) just one set only – "US Pilots Seated (WW2)" by PJ Productions. Unfortunately, pilot figures in this set are inapplicable for the World War II era as their headgear is totally wrong: they have hard plastic helmets with integrated sun visors which neither of the U.S. Armed Services used before the advent of the 1950s. Navy pilots of the 1940s wore soft leather helmets with two-piece (and later one-piece) aviator goggles.

So, to get myself a historically accurate pilot figure I had to find a new head, and that came from the CMK's set of standing USN pilot figures (# 72115). I also had to reshape the footwear of the PJ's figure as Navy pilots wore neat leather shoes and not some shapeless stuff moulded by PJ. As a reference for painting the pilot figure, I used a number of period color photographs such as these: link, link.

Then, I needed some flight deck crew figures. Here, again, the choice of historically accurate figures is poor. Figures in the well-known Fujimi's set ("Flight Deck Crew & Carrier Tractor") represent the crewmen in attire that came into use in the 1970s: most of the Fujimi's figures wear multi-pocketed vests and all of them wear hard plastic headgear with headsets and one-piece ski-style goggles. Whereas flight deck crewmen of the 1940s wore jeans (classic denims), jerseys or shirts and soft fabric caps (see example here and here). Eventually one of my figures came from the already mentioned CMK's set of standing pilot figures (and was divested of some flight gear) and the other one from the Italeri's "NATO Pilots and Ground Crew" set. Both underwent "head surgery" to achieve historical accuracy.

Ford tractors were widely used on the flight decks of the U.S. Navy carriers since 1943, and historical photographs confirm that they were in service on the USS Randolph too. My model of such tractor (kit # 7007 manufactured by F4Models) is painted Ocean Grey which was the standard colour for the Navy support vehicles at that time. 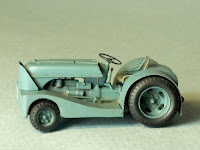 5. Notes
Scale modellers should exercise care when using photo walk-arounds of preserved Hellcats. Some of the preserved / restored Hellcats do not accurately represent the wartime machines in all detail. In particular, preserved / restored Hellcats may have the following issues:
a) Late-type drop tanks, not used by the wartime Hellcats but more common for the Bearcats and Tigercats.
b) Late-type wheel hubs, not seen on the wartime Hellcats.
c) Rearranged antennae and external lights (in particular, landing lights and recognition lights).
Posted by AlexS