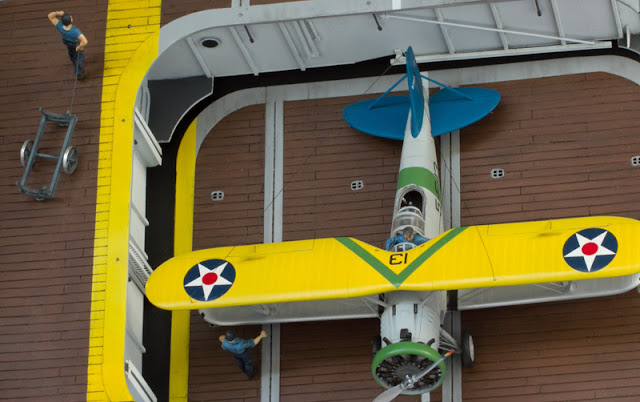 1.2. Story
In an everyday scene aboard the USS Lexington, an FF-1 of Fighting Squadron 5, positioned on the aft elevator platform, is being raised from the hangar to the flight deck. One flight deck crewman sits in the cockpit to control the brakes, while other men wait on the elevator edge, ready to manhandle the fighter onto appropriate spot on the flight deck. Another deck hand, not concerned with the VF-5B's activities, walks past with a torpedo-handling cart, apparently towards the torpedo-bombers positioned aft.

2. Kit Overview
Overall, I believe the Special Hobby's FF-1 to be a good kit; its best features are as follows:
- Very good overall accuracy (praises to Special Hobby for using historical data and not relying on walkaround pictures of the Canadian Car & Foundry G-23 airplane preserved at Pensacola).
- External surfaces are smooth, with delicate recessed and raised (where appropriate) details.
- The surfaces are not marred by dreadful bullet hole-style imitation of rivets that is an unfortunate characteristic of many aircraft model kits being produced now by Chinese and even some of the European manufacturers.
- An excellently cast & detailed resin engine, a small set of photo-etched metal items (including the instrument panel) and a printed film for the instrument panel are already inside the box. You don't need to spend anything on aftermarket stuff.
- Accurate decal, which is a rare occurrence with out-of-the-box decals.
But there are also some features that are not so good:
- The most challenging subassembly of any biplane kit – the wing box, with its associated cabane struts and interplane struts – does not have any tabs and respective recesses to correctly position and align the parts. It is a pity that the Special Hobby's technology does not allow for a one-piece upper fuselage section with molded-in cabane struts, such as the one we see on an ancient SBC Helldiver kit by Heller.
- The main wheel parts are inaccurate (tire profile too big).
- It would have been better if the canopy was vacu-formed and not injected plastic: the sliding canopies were very rarely closed on the U.S. Navy biplanes of the 1930s, and replicating "stacked-on" canopy sections with thinner vacu-formed items is easier and more realistic.
I did not photograph the box contents – there are a couple of good reviews available on the Internet that include good photographs: link and link.

The enhancements that I've made when building my model are as follows:
1) The kit's resin engine is excellently detailed, beautifully cast and not over-engineered (like some of the aftermarket engines that require assembly from dozens of minuscule parts), but I still thought that adding the ignition wiring is worthwhile.
2) A number of openings were cut out for more realism, such as various inlets and vent ports on the fuselage; cockpit steps; gun cartridge ejector openings; horizontal stabilizer technological cut-outs.
3) Instead of relying on very small plastic tabs, I joined the lower wings and the horizontal stabilizer to the fuselage by means of drilling holes and inserting metal reinforcing rods. I also had to make recesses on the fuselage, the upper wing and the lower wing to accommodate the interplane struts and the cabane struts. Still, the process of assembling the biplane wing box has tested the very limits of my patience.
4) Upper and lower wing hand grips imitated.
5) The kit's inaccurate main wheels (see my comparison photograph) replaced with a set of better ones, copied from the Curtiss BFC-2 model kit by RS Models.
6) Main landing gear linkages scratch-built from metal wire, as I considered the kit's plastic parts being too thick scale-wise.
7) Machine gun barrels scratch-built from thin metal tubes (syringe needles).
8) Scratch-built Pitot tube added to the port N-strut, scratch-built Venturi tube added to the starboard fuselage side, scratch-built gun sight added to replace the kit's indifferent plastic part.
9) Canopy cut into sections to be positioned open (customary for the Navy's airplanes of the era, especially while on deck). In the end, I'm not entirely satisfied with how the resulting canopy sections look like in terms of their proportions, but creating a new, better shaped canopy from scratch was beyond my power.
10) Clear external lights added (taken from very useful sets produced by a company named Elf), including:
a) Landing light on the port lower fuselage.
b) Coloured navigation lights on the upper wing tips.
c) Coloured formation lights on the horizontal stabilizer leading edges (yes, they did exist; here's a good photo: link).
11) All external bracing and antennae wire imitated.
The rear machine gun is of course modelled in the stowed position: it is only deployed in the air for combat training, or during maintenance (the trend with some of the modellers who love to show off everything deployed, raised or extended, regardless of the sense, is sad to observe). 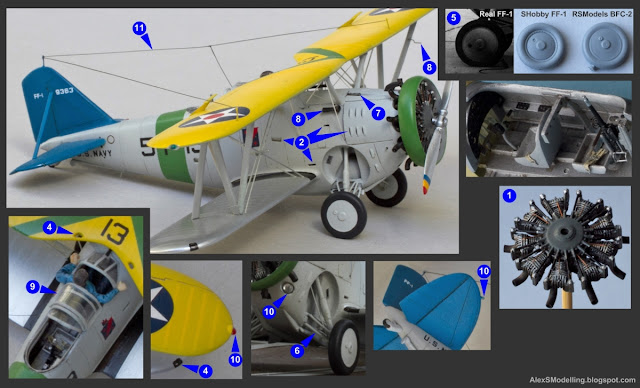 3.2. Painting & Markings
As a prototype for my model I wanted an FF-1 covered by at least one good historical photograph, and therefore I selected the BuNo 9383 assigned to the VF-5B (here's the photo: link).
The top surface of the upper wing is Chrome Yellow. The True Blue color of the tailplane was assigned to the VF-5B squadron when it was based on the carrier USS Lexington, and the Willow Green trim marks the leader of the 5th section in the squadron. The fuselage is painted Naval Aircraft Grey, as prescribed by the Navy's directives of the time and as confirmed by historical photographs (thankfully, even a color photograph exists to prove this – see link). The rest of the airframe is painted Aluminium.
The national insignia and other markings came from the kit's decal sheet, which is accurate.

3.3. Presentation
My small diorama is intended to replicate a fragment of the USS Lexington, with the airplane being raised from the hangar to the flight deck on the after elevator platform.
1) My elevator well imitation is mostly sheet plastic. A number of small custom-made photo-etched items were used, such as the ladder and the tie-down eyes. Everything was built basing on the relatively scarce historical photographs (such as this one: link).
2) My flight deck crew figures came from CMK #72115, Hasegawa #X72-7, Fujimi #35001, Italeri #1246 and Airfix #1748 sets, with all of them undergoing some sort of modification to headgear or uniform (in fact, I had to make some resin copies first, as the original Italeri and Airfix figures, while being very good shape-wise, are made from some horrible polyethylene substance which is totally unworkable from the modelling perspective).
a) Of course it would take more than three guys to manhandle an airplane, even a small 1930s fighter, but we will assume that the rest of the team is waiting just a couple of steps further from the elevator well edge and thus out of the scope of my little diorama.
b) It may appear that the crewman in the pilot seat is sitting too high, with his head not clearing the canopy, but this is confirmed by historical photographs (link); apparently, the seat height on the FF-1 was adjustable.
3) The U.S. Navy period torpedo-carrying cart was scratch-built basing on historical photographs (such as this one: link).

4. Reference Data
[1] Basic information on the Grumman FF in Wikipedia: link
[2] Grumman Biplane Fighters in Action | Aircraft in Action Series # 160 | Squadron/Signal Publications, 1996.
[3] Basic information on the USS Lexington (CV-2) in Wikipedia: link and original U.S. Navy plans of the ship (see the "General Plan" link there in the External Links section there).

5. Notes
5.1. When modelling a U.S. Navy FF-1, SF-1 or FF-2, do not put your trust into the present-day photographs of the airplane preserved at the National Museum of Naval Aviation at Pensacola. That airplane is an ex-Nicaraguan Air Force G-23 manufactured by Canadian Car & Foundry, and it has a number of noticeable differences compared to the U.S. Navy's Grumman machines (e.g., different engine cowling, propeller and exhaust; chin intake; lack of nose-mounted landing light, etc.). The Special Hobby kit has all the respective details captured accurately.
As a sidenote, I must say I don't understand the logic of the museum workers. If you have a CC&F G-23 and want to leave it in its original configuration, then paint it in the historically correct markings of either the Royal Canadian or Nicaraguan Air Force! If, on the other hand, you want it painted and marked as a U.S. Navy Grumman FF-1 (much more "prestigious" markings, eh?), then you'd better convert it so that its configuration is correct for the Grumman FF-1. Aren't museums supposed to uphold historical accuracy? Why do we have to look at hybrids? But certainly the Pensacola's G-23 is not the worst example of this approach.

5.2. The U.S. Navy's True Blue and Willow Green seem to be rather "difficult" colors. Whenever you see respective artwork or color profiles, in books and magazines or elsewhere on the Internet, the representation of True Blue and Willow Green is nearly always wrong: either too light or too bright. The kit manufacturer's instructions are not to be trusted either: for instance, the Special Hobby's FF-1 manual advises C34 Sky Blue and C64 Yellow Green (Gunze Sangyo numbers), both rather questionable in this particular case. As always, historical photographs are your only true friends. It is a pity that very few color photographs from that era are available, yet they can be found. The blue can be very well seen here, and the green here.

5.3. I am afraid that my presentation of the USS Lexington's elevator well is only an approximation when it comes to some small detail. I did what I could, but there are simply not enough photographs available. Regretfully, books that describe the USS Lexington offer little help in this regard: they generally provide good descriptions of the ship's design and career, but when it comes to the visual side of the story – meaning the photographs – some of the authors appear to suffer from a kind of "battleship mindset". A case in point is the "Lexington Class Carriers" book by Classic Warship Publishing (author S.Wiper): apart from a number of general bird-eye views of the ship, there is not a single (!) photograph of any of the aviation facilities, such as the elevators, the arresting gear or the hangar deck, while on the other hand, there are ten (!) big photographs specifically showing the ship's silly 203mm gun turrets. Is it a book about an aircraft carrier or about a battleship, one is moved to ask? Clearly the author did visit some archives, and I refuse to believe that those did not contain photographs of the America's then biggest carrier's aviation facilities. The "Lexington, Saratoga" book by the Polish publisher "AJ-Press" is better in this regard, but still the pictures where the elevator wells can be seen provide few details for a comprehensive 1/72 scale model.