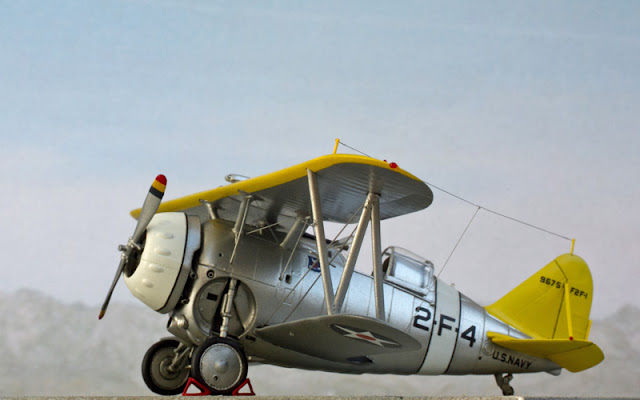 1.2. Story
There is no particular story behind this small vignette. An F2F-1 of Fighting Squadron 2 is parked on the apron of a Naval Air Station, while two pilots are in conversation nearby.

2. Kit Overview
This resin kit is an accurate and well detailed representation of the tiny Grumman F2F-1. My full review of the kit is available here: link

3. Construction
3.1. Building
First, some minor problems of the kit had to be corrected:
1) The too prominent rib running the whole length of the kit's belly was deleted; some minor details visible on the belly of the real aircraft were added.
2) Small gaps between the elevators and the fuselage, not present on the real aircraft, were rectified. 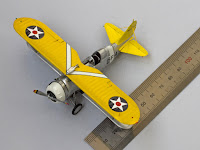 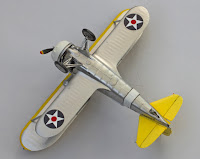 Then, although to some it may appear that the kit is well detailed out of the box, there is a number of items present on the real F2F-1 that are not in the kit, and therefore had to be scratch-built:
3) The kit's photo-etched pilot restraints were replaced with more historically accurate ones from an Eduard's generic set. This was the only improvement I've decided to make inside the cockpit.
4) Unusually for its time, the F2F-1 had movable horizontal stabilizer. Historical photographs show that in most cases a parked F2F-1 had its horizontal stabilizer in a negative angle of attack position, with the elevators drooped. Thus, this is the configuration that I replicated on my model.
5) Scratch-built trimmer added to the vertical stabilizer.
6) Oil cooler intake, carburettor exhaust and engine exhaust pipes drilled out.
7) Engine ignition wiring scratch-built (the kit's photo-etched part is, in my view, way too thick and contrasts unfavourably with the minuscule detailing of the engine itself).
8) Cockpit step and shell ejector chute openings cut out on the starboard side of the fuselage.
9) Scratch-built Pitot tube added to the port N-strut, scratch-built Venturi tube added to the starboard fuselage side.
10) Gun barrels scratch-built from thin metal tubes.
11) This tiny biplane possessed a sizeable collection of external lights, and all of those lights had to be scratch-built from clear plastic, including:
a) Landing light on the port lower fuselage.
b) Coloured navigation lights – two on the upper wing tips and two on the upper wing surface, plus one clear navigation light on the aft end of the tail cone.
c) Five formation lights – one dorsal, two on the lower wing and two coloured ones on the horizontal stabilizer leading edges.
12) All external bracing and antennae wire imitated.
In addition,
13) A gun camera of the type seen on many Naval aircraft of that era, including "my" F2F-1 BuNo 9675, was scratch-built. 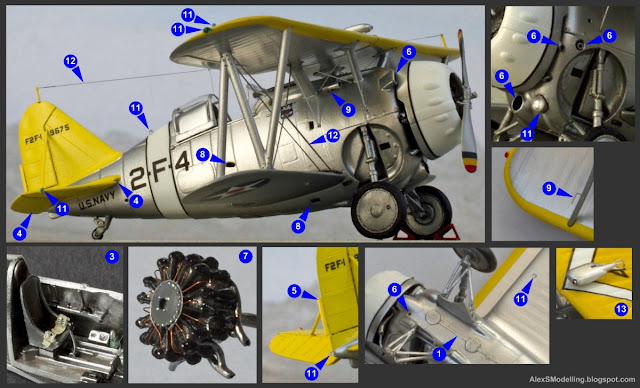 3.2. Painting & Markings
As a prototype for my model I wanted an aircraft covered by good historical photographs, with some hopefully in color. These criteria are met by the F2F-1 BuNo 9675 assigned to the VF-2B, and this is the variant that I selected.
The top surface of the upper wing is Chrome Yellow (note that the yellow overlaps the leading edge), while the Lemon Yellow tailplane designates a unit assigned to USS Lexington and Insignia White trim with thin black border marks the leader of the 2nd section in the squadron. A careful study of historical photographs (see source [3]) will tell you that this machine, as well as its stablemates, had its fuselage painted in silvery Aluminium Dope color and not in Naval Aircraft Grey, as prescribed by the Navy's earlier directives and as the kit's instructions advise. The rest of the airframe is also Aluminium Dope, and "my" BuNo 9675 appears to have had it polished to a natural metal-like shine (see historical photograph: link).

Unfortunately, the kit's decal is defective to the point of being totally unusable (colors are out of register, all elements are pixelized), so I designed the required letter & numeral decals in accordance with historical photographs and had them custom-printed. The national insignia came from a generic decal sheet by Techmod.

3.3. Presentation
The vignette base is sheet plastic. The pilot figures came from CMK # 72110 set and were slightly modified to make them Navy rather than Air Force guys.

5. Notes
5.1. In regards to the paint scheme, this particular kit's instruction sheet is not alone in suggesting an incorrect fuselage color. Even the massive monograph "US Navy & Marine Corps Aircraft Color Guide" by the well-known author John M. Elliot says nothing about the fact that somewhere in the second half of the 1930s the prescription to paint all external metal & wood surfaces in Naval Aircraft Gray, very clearly given in the Navy's specification still applicable at that time (SR-15a), was de-facto abandoned, and that most of new aircraft types of that era had their fuselages painted in Aluminum Dope. There are many historical photographs that clearly show overall Aluminum fuselages on late 1930s and early 1940 USN planes; I am giving just a very small selection: SBC-3 (link), SOC/SON (link), F3F-2 (link), TBD-1 (link), BT-1 (link), SBD-1 (link), XFL-1 (link), XSB2C-1 (link), XF5F-1 (link).
Still, in many cases model kit manufacturers and modelers alike seem to be putting their trust in texts and not in actual historical photographs.

5.2. It amazes me how often you see modellers declare that they won't build resin model kits, implying that resin is the reason for that self-abstention. Scale modelling is a bit like madness, and surely there are multiple different kinds of this madness... Still, for me the key factor in any scale model is its accuracy; after accuracy, I value the level of detail and the quality of molding/casting. If the model is accurate and of good quality, then the medium – be it plastic or resin – is of no importance to me. Moreover, it is my view that a high-quality, well-designed resin kit would in many cases be easier – and not harder! – to build than a plastic model of the same or similar type of airplane. The Grumman F2F-1 kit by Attack Squadron is an excellent proof. Building this resin kit was immensely easier than building plastic kits of Grumman FF-1 and Grumman F3F-1 by Special Hobby and MPM respectively, all three being biplanes of the same size and layout. Here is just one example: where the Attack Squadron's resin kit parts had minuscule tabs and respective recesses to correctly position and align them, the two aforementioned plastic kits offered no such amenities for the most challenging subassembly of any biplane kit – the wing box, with its associated cabane struts and interplane struts.
Posted by AlexS