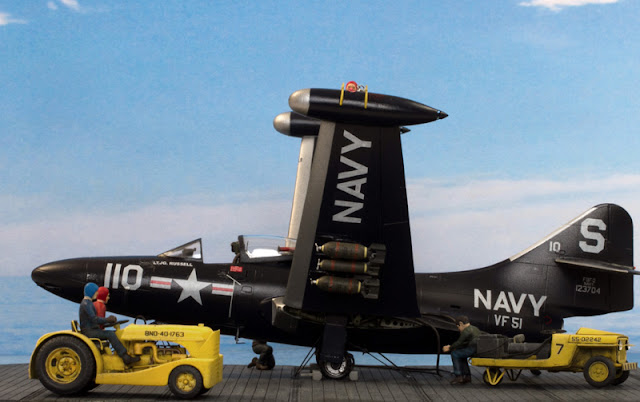 An F9F-2 Panther jet of Fighter Squadron 51 aboard the USS Essex is being refueled before a routine ground attack mission of the Korean War. An NC-1A electrical starter is standing by to start the Panther's engine and a Ford tractor is driving by on its way to tow and spot other aircraft. 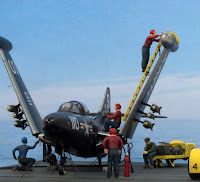 2. Kit Overview
The Hasegawa's kit is very old (tooled somewhere in the 1970s) but surprisingly accurate for its age. They quality of moulds is excellent. The overall geometry is good, and there are only the following issues, all of them correctable:
- Main landing gear openings are placed a bit too far back (they should be moved ~2mm forward; see my comparison picture).
- Gun barrels are too long (they protrude too far out from the nose cone).
- Weapon pylons are shaped inaccurately.
- Main wheel hubs are inaccurate; the shape of the real ones is immensely more sophisticated and is very well represented by an aftermarket wheel set from Aires.
- Speed brake panels are inaccurate in all respects (perforation; length to width ratio).
As it is typical with Hasegawa, the cockpit interior and wheel well detail are austere. Furthermore, a fair number of small details found on a real F9F-2 are missing on the kit, but this is entirely normal for a kit this old.

3. Construction
3.1. Building
This is the list of enhancements that I have added to what was in the box: 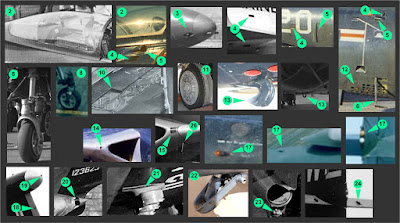 1) Cockpit interior detailed with the help of the Eduard photoetched set.
2) Scratch-built details added to the area beneath the canopy – in particular, the canopy defrosting air hose system and the transparent antenna panel.
3) Gun barrels scratch-built from thin metal tubes.
4) Various fuselage vents cut out (they would not be discernable otherwise, as they are too shallow in the kit).
5) Scratch-built air scoops and vents added to the nose area.
6) Cabin step added (Eduard's PE part).
7) Scratch-built nose landing gear well interior added.
8) Nose gear leg scratch-built, correct resin wheel (manufactured by Aires) added.
9) Main landing gear openings moved ~2mm forward.
10) Main landing gear well interior added; parts of the Eduard photoetched set were used for this, but they are barely seen anyway since the Panther's main landing gear doors are closed at all times except when the gear is in the process of raising or lowering.
11) Correct main wheels added (manufactured by Aires) as well as some minor details to the main gear legs (scissor links, brake lines, tie-down rings).
12) Scratch-built speed brake panels added; neither the respective kit parts nor the photoetched items from Eduard are accurate (see my comparison picture). Speed brakes are of course closed, as it should be on an operational Panther in normal conditions.
13) Scratch-built catapult bridle hook and catapult holdback ring.
14) Small gun camera opening added to the starboard air intake lip.
15) Scratch-built clear approach light added to the port air intake lip.
16) Unfortunately, the resin wing fold set from Aires that I have obtained was of no use: first, the main landing gear opening is in the wrong place (see my comparison picture); then, the wing segments of the Aires set are shorter and thicker (in profile) than the kit's wing. Thus it was easier to scratch-built the whole wing fold mechanism in the end.
17) Clear navigation and position lights added to wingtip tanks, fuselage spine and vertical stabilizer.
18) Scratch-built clear landing light added to the starboard wing.
19) Nose openings in the wingtip tanks made smaller (they are too wide in the kit).
20) Tailcones of the wingtip tanks modified to imitate the fuel dump system.
21) Underwing weapon pylons scratch-guilt; the ones provided in the kit are inaccurate. Note that at least two variants of the underwing pylons were used on the F9F-2, and historical photographs indicate that "my" BuNo 123704 had the early pylons installed.
22) Scratch-built tail bumper added. Note that it is normally extended on a stationary Panther.
23) Miscellaneous details added to the area beneath the exhaust pipe.
24) Horizontal stabilizer trim tab actuators scratch-built.
25) Open fuel tank filler caps imitated on the fuselage and the port side wingtip tank.
26) Scratch-built Pitot tube and T-shaped devices beneath the air intakes added (never seen on museum photos but invariably present on historical photographs of Panthers with folded wings).
27) Weapons added in the form of 250 lbs and 100 lbs bombs (manufactured by Eduard). Such mixed load is confirmed by historical photographs.

3.2. Painting & Markings
I can't say that there are many Panther models that are painted with adherence to historical accuracy in all respects. However, historical photographs do exist, and they, with due care, allow to solve nearly all of the mysteries. Here are some results of my research in the form of guidelines applicable to the Sea Blue-camouflaged F9F-2 Panthers:
- Wing, air intake, horizontal stabilizer and vertical stabilizer leading edges: natural metal (width of natural metal stripes on air intakes and wing varies).
- Wingtip tanks front section: natural metal (width of natural metal section on wingtip tanks varies).
- Air intake trunk interior: natural metal.
- Wingfold interior: Interior Green.
- Inner flaps interior: Interior Green or Sea Blue (not red as seen on some of the museum exhibits).
- Wheel bay door inner sides: Interior Green (not white as seen on some of the museum exhibits).
- Wheel bay interior: Interior Green.
- Landing gear legs: Sea Blue, except for oleo strut pistons which are polished steel.
- Wheel hubs: natural metal or Sea Blue (less common).
- Speed brake aft edges: Insignia White on some (but not all) Panthers.
- Speed brakes must be closed, therefore the color of their interior should be irrelevant. I couldn't find color historical photographs where the speed brake well interior is seen, but the Navy's standard practice of the time was to paint it Insignia Red.
- Tailhook tip: natural metal.
- Exhaust pipe interior: natural metal.
- Dashboard, side consoles and cockpit sidewalls: flat black.
- Cockpit interior and area beneath the canopy: Interior Green is the base color. However, a number of small items there have their own colors (e.g., canopy defrosting system is dull brown and red).
- Ejection seat: Interior Green is the base color, with black headrest and tan seat belts.
- I have seen no evidence of external fuel tank filler caps being painted red (as seen on some of the museum exhibits).

Please note that I do not make any guesses regarding those Panthers that have received the experimental natural metal finish (as there are too few period color photographs available), and the later Light Gull Grey + Insignia White color scheme is a different story altogether.

Thus my model was painted in accordance with the guidelines I list above. Decals are custom-made, with some stenciling from the Microscale # 72343 sheet.

It has to be noted that according to available historical photographs the BuNo 123704 / S110, unlike some of its squadron mates, had neither the squadron badge nor the red trim prescribed for the 1st squadron of the carrier group. 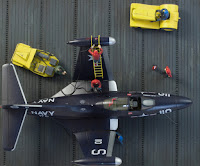 3.3. Presentation
1) My idea was to showcase the awkward refueling process peculiar to the Panther (confirmed by many historical photographs such as this: link). When a Panther was spotted on the flight deck, the wings were always folded to save space. Thus specially designed ladders had to be used by flight deck crewmen to reach the wingtip fuel tanks and fill them. Also note that the wings were folded with ordnance already in place: photo.
2) A scene like this needed flight deck crew figures. As I mentioned in my earlier articles, there are no U.S. Navy flight deck crew figures with historically accurate attire for the 1940s and 1950s. So my figures came from a number of sets (Italeri, Fujimi, Hasegawa) and underwent much customization (actually, the first step was to make resin copies, since the original Italeri figures, for instance, are made from polyethylene which is totally unworkable from the modelling perspective).
3) Any aircraft parked on the flight deck must be secured to the said deck. This is a very strictly followed rule: if there is no pilot (or crewman) in the cockpit to operate the brakes, the aircraft is always tied down (many modellers overlook this and just place an empty-cockpit aircraft model on a piece of flight deck). During the 1940s and 1950s the flight deck crews used ropes to secure aircraft (see historical photo: link, link); later, ropes gave way to much sturdier chains.
4) It should be noted that during the Korean War the practice of having conspicuous "Remove Before Flight" tags to mark items like Pitot tube or ordnance safety pins was not yet in place (see historical photo: link). Therefore my model has no such flags.
5) The Panther's jet engine required external electrical power to be started. To provide this, the U.S. Navy used a specially designed vehicle, the NC-1A flight deck aircraft starter (see historical photo: link). My NC-1A (F4Models kit # 7006) is shown awaiting orders to start the jet engine.
6) Ford tractors were used on the flight decks of all U.S. Navy aircraft carriers during the Korean War (see historical photo: link). My tractor (F4Models kit # 7007) is shown driving by, on its way to spot other aircraft.

5. Notes
I am amazed to see how the model kit manufacturers are always offering us separate speedbrakes, at least for the U.S. Navy aircraft, and also how the modellers are invariably taking the plunge and presenting the said speedbrakes extended. You will be hard-pressed to find a model of the F9F-2 sans extended brakes on the Internet.
Speedbrakes (or air brakes) are designed to be used when an aircraft is airborne so as to facilitate weapon delivery, combat air maneuvering or landing. When the aircraft is on the ground, no pilot will extend air brakes just for fun and then leave them extended. On certain aircraft types, after the pressure bleeds away from the hydraulic system, the air brakes will "fall down" due to gravity. But this is entirely dependent on the construction of the aircraft in question: for example, air brakes normally fall down on a Sabre or a Fury, but never on a Skyraider nor on a Hornet, whose air brake is physically unable to fall down. Yet, apparently, the modellers in general are not interested much in such things as historical or technical accuracy: these considerations generally go overboard to make room for "showability". And thus on various shows and contests one can regularly see people swoon over those models where the maximum possible number of access panels and other items are presented open or extended (people assume that this is not easy to model, which is true). But where is the glory in awing the laymen, I wonder?
Posted by AlexS