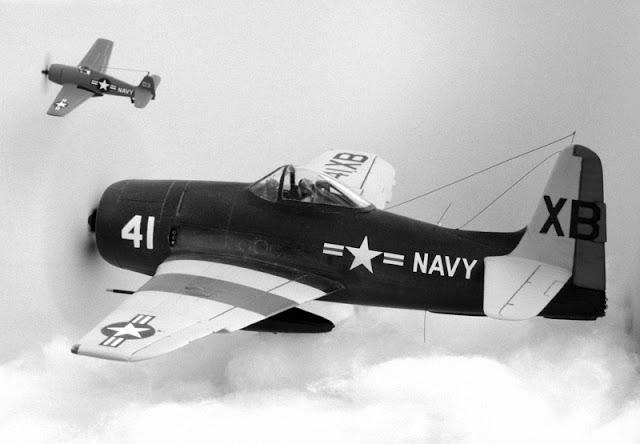 1.2. Story
An F8F-2D Bearcat of Experimental and Development Squadron Two (VX-2) is in the air, doing an unglamorous but necessary chore by providing aerial target services to other training or operational units of the U.S. Navy. The Bearcat acts as a target controller aircraft, and the full-scale aerial target that the Bearcat's pilot directs, a Grumman F6F-5K Hellcat, can also be seen in the distance. 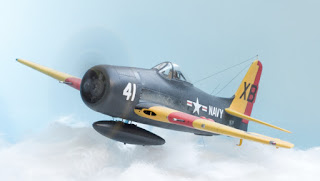 2. Kit Overview
This kit, in its positive and negative aspects, is a typical representative of the Czech short-run.
On the one hand, we have
- Very good overall accuracy of plastic parts.
- Smooth external surfaces with delicate recessed details where appropriate, not marred by dreadful bullet hole-style imitation of rivet lines (which is an unfortunate characteristic of many aircraft model kits being produced now by Chinese and even some of the European manufacturers).
- A nicely cast resin engine.
But on the other hand,
- All of the small items (cockpit interior, landing gear, pylons, armament) are rather crude, with details which are either non-existent or way too thick, scale-wise.
- The clear canopy is very thick, it distorts heavily and has poor transparency; its shape is not entirely accurate.
- The assembly is somewhat challenging in terms of fit, and also due to the lack of tabs and respective recesses to correctly position and align many of the important parts.
- The decal is totally inaccurate (see my "Notes" below).
I did not photograph the box contents; photographs can be found in some of the reviews already available on the Internet, such as this and this. 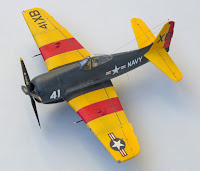 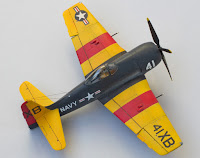 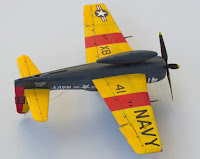 To have an accurate F8F-2 Bearcat model, one have to subject the Sword's kit to the following improvements:
1) The kit's cockpit details (seat, headrest, rollover bar, gunsight) are very thick and crude. All were replaced with scratch-built stuff.
The vacu-formed canopy made by Falcon (set #1) which I used as a replacement for the Sword's very poor canopy has proved to be a mixed blessing. Its transparency is excellent, but its shape is still less than accurate: it stands too tall, and the way it blends with the fuselage is not ideal. I am less than satisfied with how it all came out, but I have no technology to scratch-build a new transparent canopy myself.
2) The fuselage needs the following improvements:
a) Engine exhaust tubes properly imitated.
b) Oil cooler exhaust slots (underside of the engine cowling) cut out.
c) Clear white dorsal navigation light.
d) Small dorsal and ventral whip aerials plus dorsal wire aerial.
e) Rudder trim tab is to protrude behind the rudder's trailing edge.
f) Aft fuselage detailed: tail hook end, catapult holdback attachment point and clear white tail navigation light.
As my model is presented in flight, in my case there is, thankfully, no need to scratch-build the Bearcat's extremely complicated landing gear bay interior.
3) The wing needs the following improvements (from wing root to wing tip):
a) Small oval openings between the fuselage and the oil cooler intakes.
b) Dividers inside the big oval oil cooler intakes.
c) Gun camera opening – port wing only.
d) Cannon barrels (the kit's plastic sticks replaced with metal syringe needles).
e) Clear window for the approach light – port wing only.
f) Pitot tube (the kit's plastic part is way too thick) – port wing only.
g) Circular blue formation lights – both wings, upper and lower sides (see photo - link).
h) Aileron trim tabs are to protrude behind the aileron trailing edge (this feature is absent on many drawings but can be clearly seen on good photographs of actual Bearcats such as this - link).
i) Wingtip navigation lights – coloured lamps (red for port, green for starboard) inside clear caps.
As my model is presented in flight, in my case there is, thankfully, no need to detail the kit's landing gear legs and doors, nor to replace the kit's mediocre main wheels.
4) Some fine detailing added to the fuselage drop tank.
The following features are only relevant for the F8F-2D target controller variant:
- Two outer guns removed.
- Additional dorsal wire aerial installed.
Unfortunately, I could not find any information on whether there were any differences in the cockpit of the target controller variant. 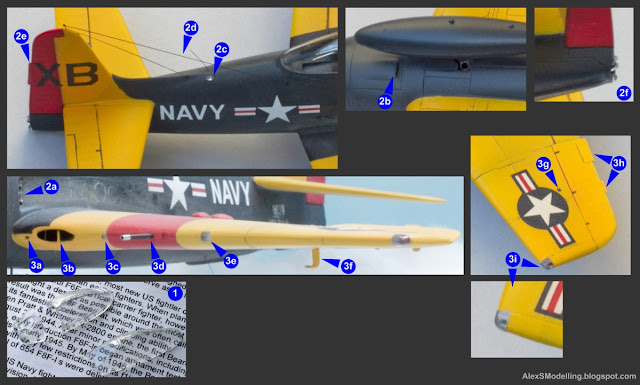 3.2. Painting & Markings
Most of the operational Bearcats of the U.S. Navy wore plain Sea Blue without much in the way of special markings (one exception is the well-known machine of the Air Group 19 Commander, for which I couldn't find any decals anyway), and the only really colorful examples were the Blue Angels team's Bearcat and a number of machines in the target tug / target director paint scheme operated by several non-operational units.
Basing on the available historical photographs, I selected a machine in this paint scheme from VX-2 squadron. Therefore, the fuselage is Sea Blue; the wing, vertical stabilizer and horizontal stabilizer are Orange Yellow; the wing bands and the rudder are Insignia Red.
The national insignia, the service names and some of the codes came from generic decal sheets produced by Techmod and Microscale, while the remaining codes were custom-printed.

3.3. Presentation
Due to shortage of free space, I wanted my in-flight diorama to be as compact as possible, and yet to provide an impression of sky with some degree of realism. I've made the base from a piece of a plastic kitchen bowl, thus avoiding sharp edges and corners.
I also wanted to add an element of action by introducing the Bearcat's charge to my diorama. To do so I have attempted to employ the effect of forced perspective, and my model of the F6F-5K Hellcat aerial target comes from a 1:350 scale F6F Hellcat set produced by Trumpeter (# 06210). The Hellcat is very small, so I chose not to correct the Trumpeter's panel lines (a bit crude and not entirely accurate). Nevertheless, I added some scratch-built details: engine face; external fuel tank; aerial; clear navigation lights. Decals came from generic sheets produced by Techmod and Microscale. 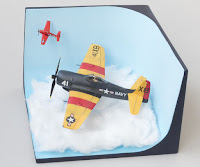 5. Notes
5.1. Target controller aircraft are an interesting group that, in my view, is not covered sufficiently. Whenever an aircraft type has such a variant, most publications do not go further than simply mentioning their existence and their special paint scheme. If you dig a bit deeper into aviation books and various Internet articles, you may in some cases find information on the production/conversion quantities of such variants, on which units they flew with and even on which types of targets they have actually controlled. But so far I did not have much success in learning how – i.e., by means of what instruments and devices – did the "master" aircraft and its crew control the "slave" aircraft? It is not an idle question. Besides being of interest to a technically and historically minded researcher, it is of direct importance to a modeller who builds a target controller aircraft. It is true that the assortment of external antennae, requisite for remotely controlling another vehicle, can in most cases be simply derived from good historical photographs. But what about accurately modelling the interior? Certainly the target controller variant had some special arrangements in the cockpit / on the flight deck that distinguished it from the base variant. Yet so far I was not able to find any historical photographs or explanations to shed light on this.
Most interestingly, how did it go for a single-place aircraft, a target controller derivative of a fighter? How did the pilot control both his own aircraft and the target? What, specifically, was added to the cockpit in each particular case to enable this type of remote control?
As a reference, here is a list of the U.S. Navy's target controller aircraft that have been specifically mentioned in trustworthy books and can be identified on historical photographs:
single-place aircraft: F8F-1D & -2D Bearcat; F9F-2KD & -5KD Panther; F9F-6K2 Cougar; FJ-3D & -3D2 Fury; DF-8F Crusader.
multi-place aircraft: JRB-1; SNB-1; JD-1D; F7F-2D Tigercat; DT-28B Trojan; DP-2E Neptune; DC-130A, E & H Hercules.

5.2. The Bearcat in the 1:72 scale does not seem to be particularly lucky when we consider the accuracy of available decals.
The most recent (as of the year 2019) of the Bearcat kits, manufactured by the already defunct Polish brand Attack Squadron, has substantial inaccuracies in its decal for all three of the suggested variants. My detailed review of this kit can be found here: link.
The decal that comes with the Sword kit (the one that I have just built) is also inaccurate for both of the suggested variants.
The VF-3 variant:
a) The national insignia for the fuselage and the wing should be of different sizes – not of equal size as we see on the decal.
b) The "3F4" and "4" characters are styled incorrectly on the decal. On the real aircraft there are "stenciling gaps" on each of the characters.
c) The squadron's "Felix the cat" insignia should have yellow background – not white we see on the decal. Although there seem to be no color photos of the "3F4", the Bearcats of this squadron have been photographed in color just one year later, and there we can clearly see that the insignia background is indeed yellow.
The VF-15A variant:
d) The rendering of the large aircraft numbers ("105") is not entirely accurate on the decal. Observe how the zero is wider on the real aircraft compared to what we see on the decal.
e) Aircraft numbers, visible on the engine cowling and on the landing gear doors, are not provided on the kit's decal.
f) The Aircraft type / Service name / Bureau number texts, standardized by the Navy (and present on the real aircraft just in front of and slightly below the horizontal stabilizer leading edge), are absent on the decal.
g) On the decal, the red & yellow striped item for the rudder trimmer have one more yellow stripe than evident on historical photographs.
h) No propeller markings are provided on the decal – this is applicable for both variants. 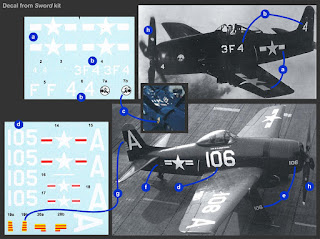 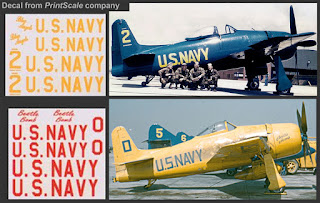 And currently there seem to be only one aftermarket decal for the 1:72 scale Bearcat that is widely available – unfortunately, it comes from PrintScale. This company is producing dozens of decals for various U.S. Navy / Marines subjects and is making the same mistakes on every decal: wrong fonts (inaccurately shaped letters and digits), wrong colors... Let's consider just the two variants for the Blue Angels team Bearcats: see for yourself how the font used for the large "U.S. Navy" lettering on their decal is entirely inaccurate when compared to the historical photographs. And, of course, for the "0 / Beetle Bomb" variant the color must be blue, not red as we see on the PrintScale decal.
Posted by AlexS