2. Kit
2.1. Box
The box is compact (20 x 15 x 5 cm) and extremely sturdy. I have rarely seen a model kit in such a durable box. Parts are safely packaged in multiple zip-lock plastic bags with bubble wrapper serving as shock absorber. 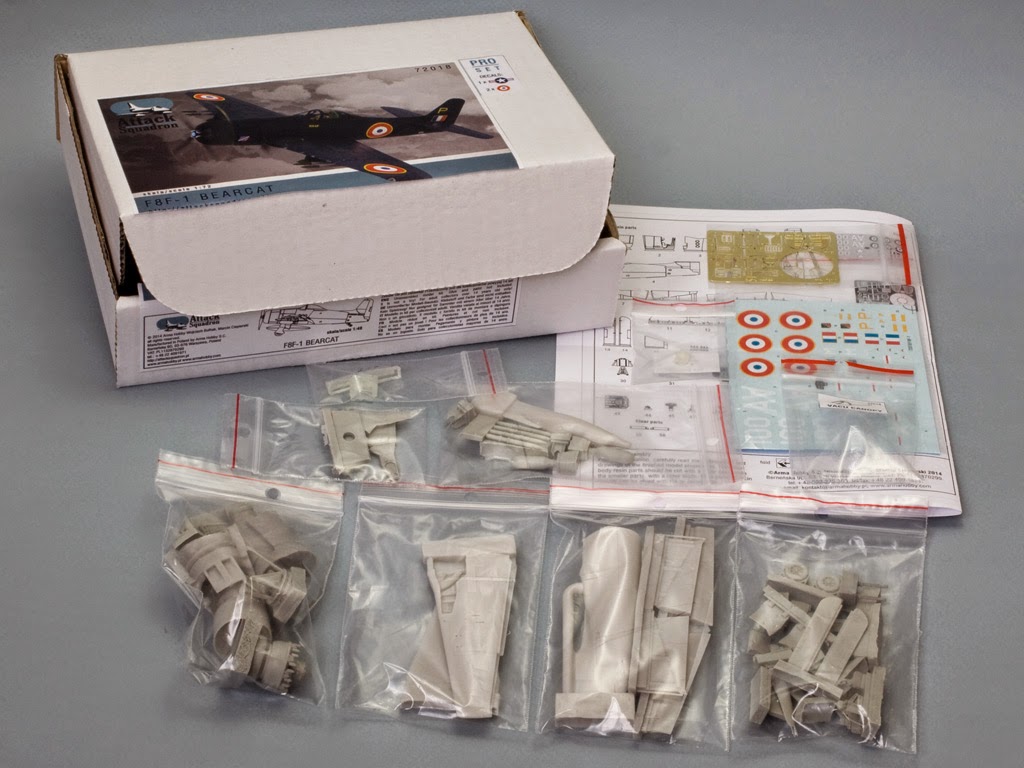 2.2. Instruction
Instruction is printed in black & white on two A4 sheets. It is also available online on the manufacturer's web site: link. It provides clear and detailed recommendations on building and painting.

2.3. Resin Items
What you notice first in this model kit is its unconventional engineering. In almost all other model kits representing aircraft of that era, you get everything in halves: fuselage as two halves, wings as two halves, engine nacelle halves... even bombs sometimes go in halves. With this kit, you are in a parallel world: there are no halves. Wings are cast solid, and fuselage consists of four cylindrical shapes that connect along the panel lines. The manufacturer has done everything possible to minimize the number of seams that you would have to fill, sand and hide. 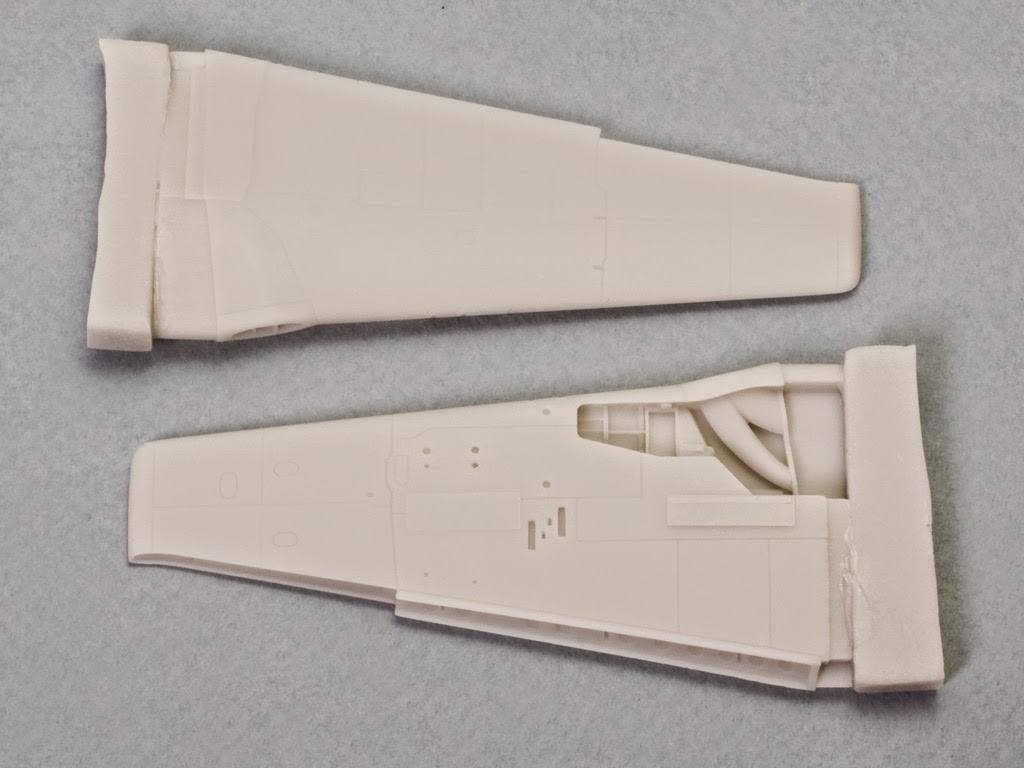 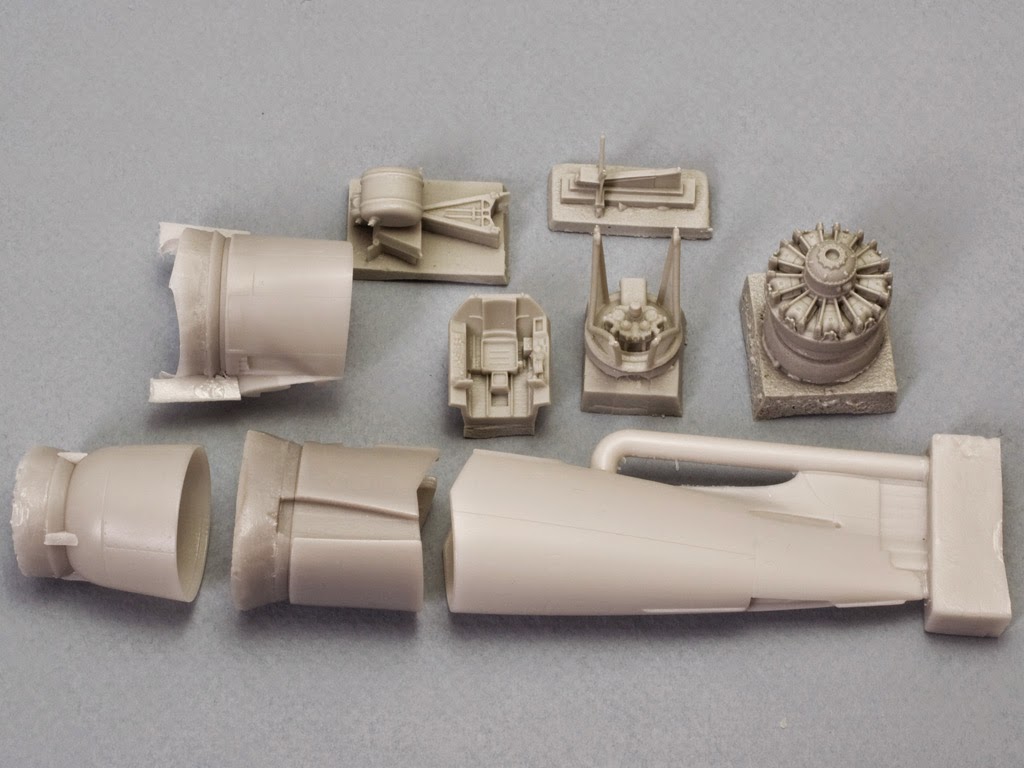 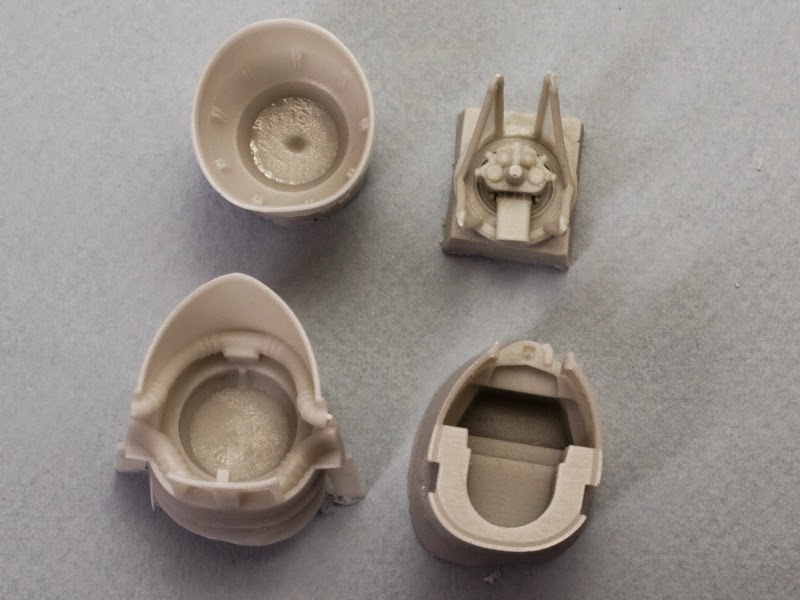 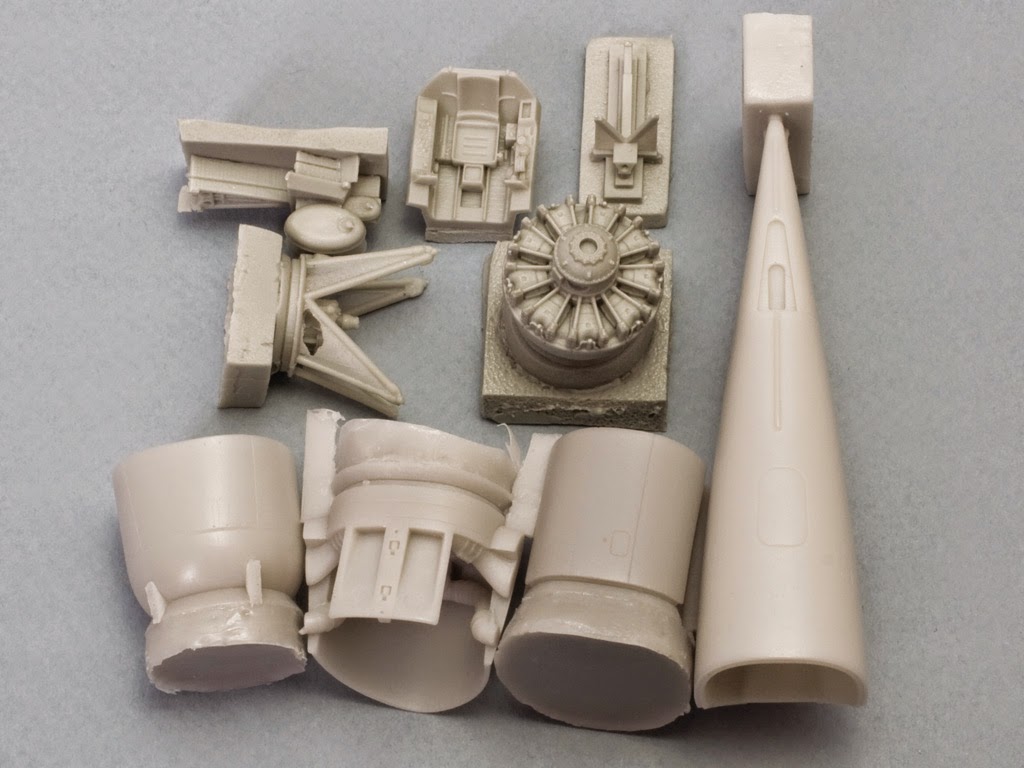 The quality of casting is superb. All surfaces are smooth, with very delicate recessed panel lines. In terms of accuracy, I can't see any issues. All kit parts perfectly match what I see on the photographs of real F8F-1s.

And on top of that you get such wealth of interior and exterior detail that is rarely seen in a 1:72 scale kit. These are some of the highlights:
- Separate control surfaces, including flaps, ailerons and elevators.
- Full forward fuselage interior: you get engine frame, oil tank, supercharger air ducts and exhaust pipes – everything that on a real Bearcat is seen through the open wheel wells.
- Highly detailed wheel wells; although you will still have to scratch-build the imitation of various tubes yourself.
- Excellent cockpit interior.
- Thickness is as close to being scale-wise as possible in a number of critical parts, such as wing trailing edge, engine cowling, landing gear legs and doors.
- Very finely detailed bomb and rocket stabilizers; you won't have to scratch-build anything here, nor go for photoetched aftermarket sets.
- Main wheels with tread pattern; this feature is sadly lacking on many 1:72 scale kits. 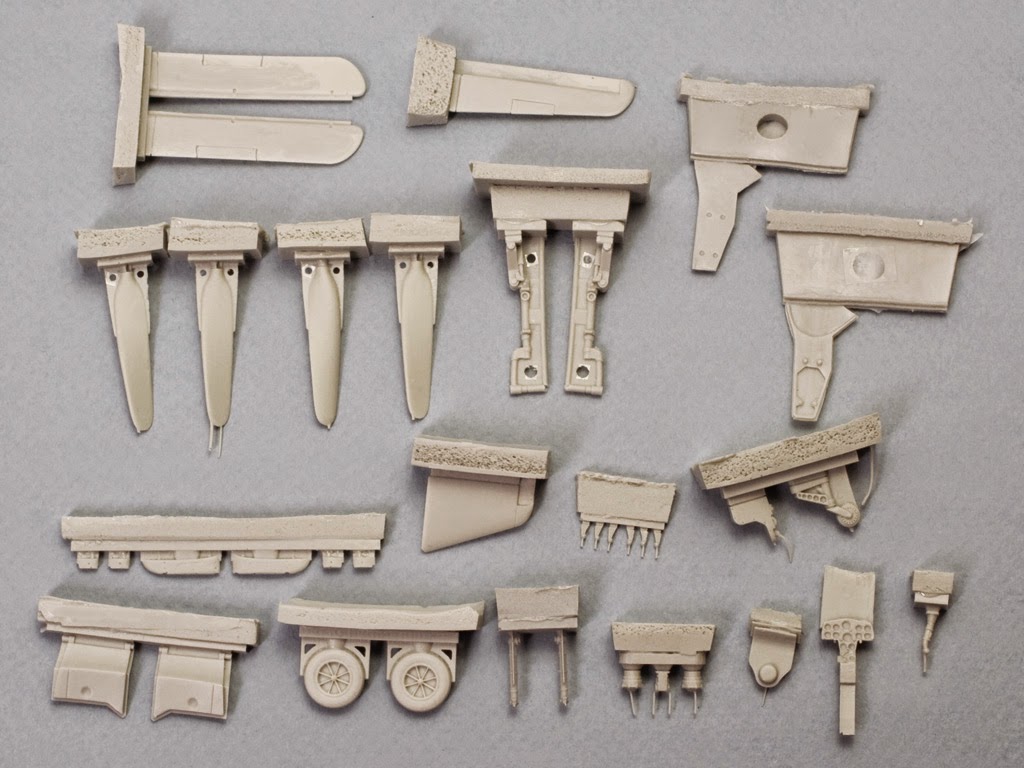 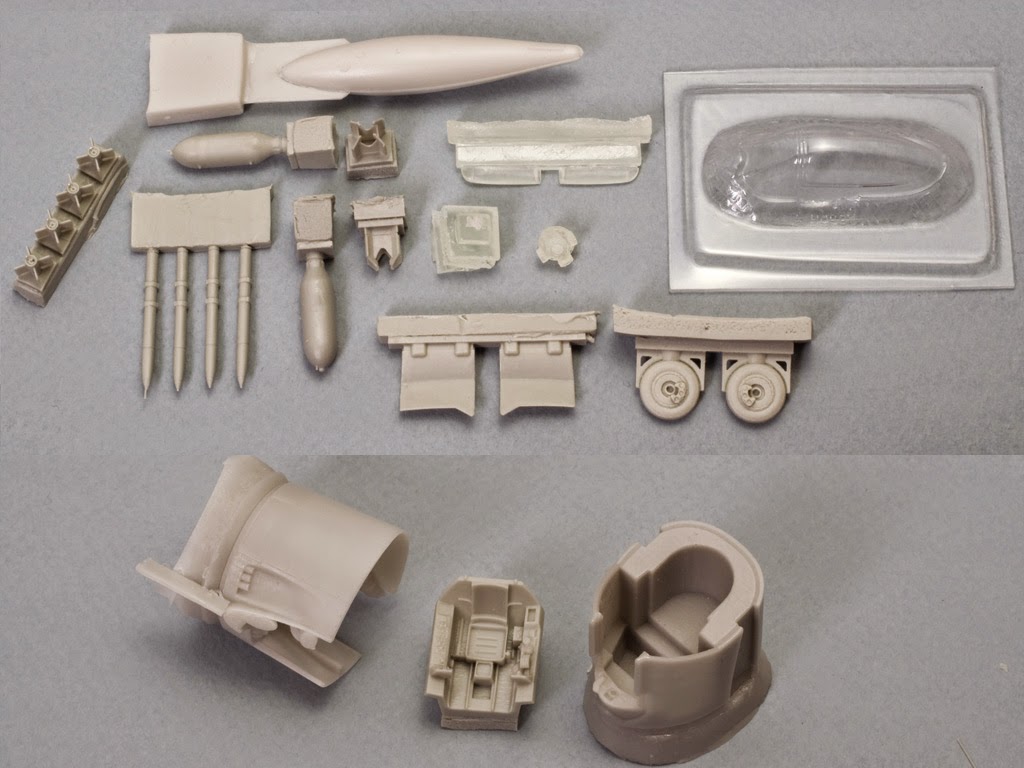 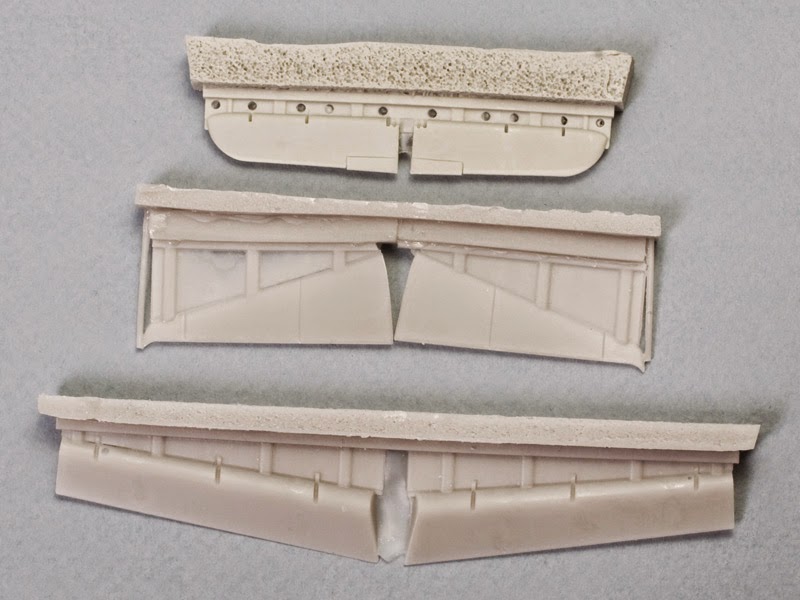 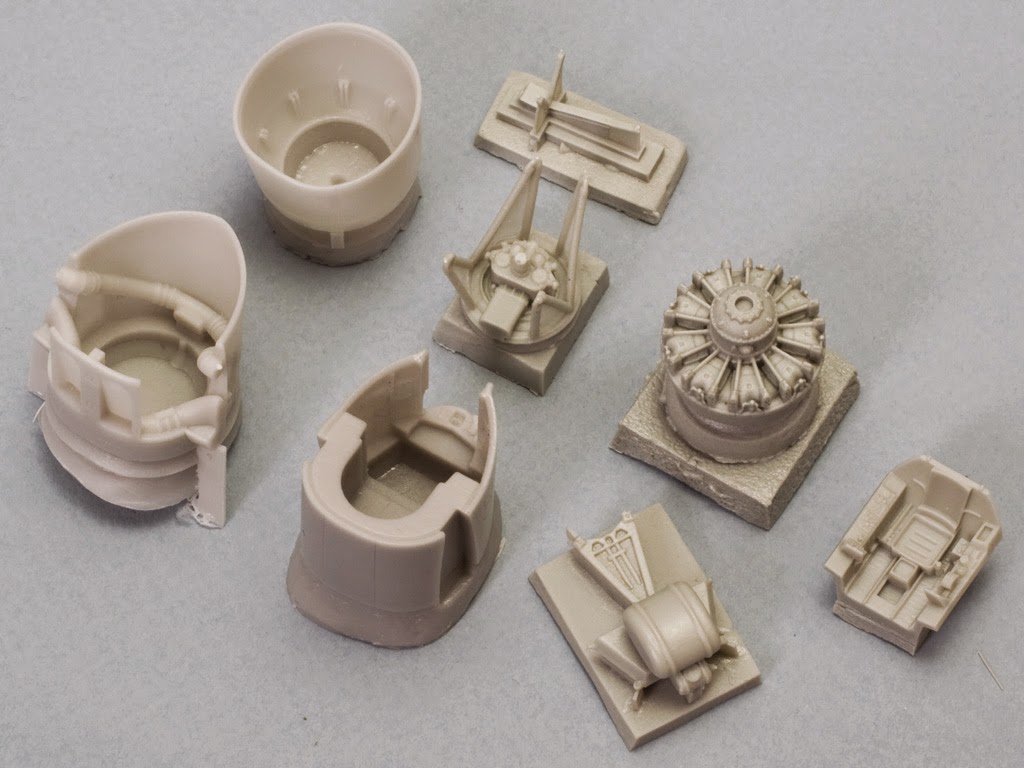 A number of critical remarks should also be made:
- As a penalty for detailed wheel wells you get rather shallow wing root air intakes. You might want to increase their depth for more realism.
- Although the tail wheel assembly is superbly detailed, it would be more convenient (for the purposes of painting) to have the wheel and its leg as two separate parts.
- One thing that should have been better in this kit is the R-2800 engine. Firstly, the kit's engine lacks a second row of cylinders; secondly, the imitation of cylinder cooler jackets should have been crisper.
- Propeller blades and hub are offered as 5 separate parts. I understand why this is so: there are limitations to resin casting technology. But why not adding a simple resin template to ease the correct orientation of propeller blades?

Unfortunately, after I separated all of the parts from their bases and tried dry-fitting them, a number of serious fit issues and casting problems became apparent:
- The ailerons and the elevators are significantly shorter than they should be in order to fit into their respective places on the wing and the horizontal stabilizer (see my photograph below). The rudder is slightly shorter too.
- The central segment of the fuselage in asymmetrical and distorted in cross-section (marked with red arrows on the photograph below). Due to complexity of this part, the traditional cure for warped resin, the hot water bath, is out of the question: you won't be able to bend this thing into the "right" shape. The manufacturer's innovative approach to parts breakdown has backfired after all, and we end up with the need for lots of putty and sanding, the only way to correcting this particular item that I can think of. 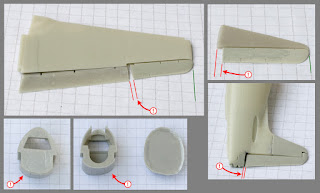 2.4. Clear Items
The kit contains a vacu-formed canopy of excellent quality, clear and thin. I see no inaccuracies in it's shape.
Four clear resin items are also included: propeller hub, gun sight and two wingtips. Propeller hub is cast transparent due to some internal technological purposes, I presume. The transparent gun sight is finely shaped but will have to be polished, as the resin is misty.
Providing out of the box clear wingtip navigation lights is a brilliant idea. This small item – perfectly easy to do in terms of injection molding technology but tedious to scratch-build from a chunk of clear plastic – is what the absolute majority of plastic kits in the 1:72 scale are regrettably lacking. But in this particular case the resin, too, is misty and needs polishing. I would also advise to saw off the clear wingtip and only use the "quarter-sphere" of the navigation light itself, otherwise there would be no way to imitate the light bulb and the reflector inside.

Sadly, after 2 years of lying in its box (room temperature, no direct sunlight) the clear resin parts have yellowed and became even less transparent than when this review was first published.

2.5. Photoetched Metal Items
I do not particularize the parts as they can all be seen clearly on the enclosed photograph. The quality of etching is superb. There is no photoetched dashboard, though, which is slightly frustrating, considering how sophisticated and well thought-trough the rest of the kit is. 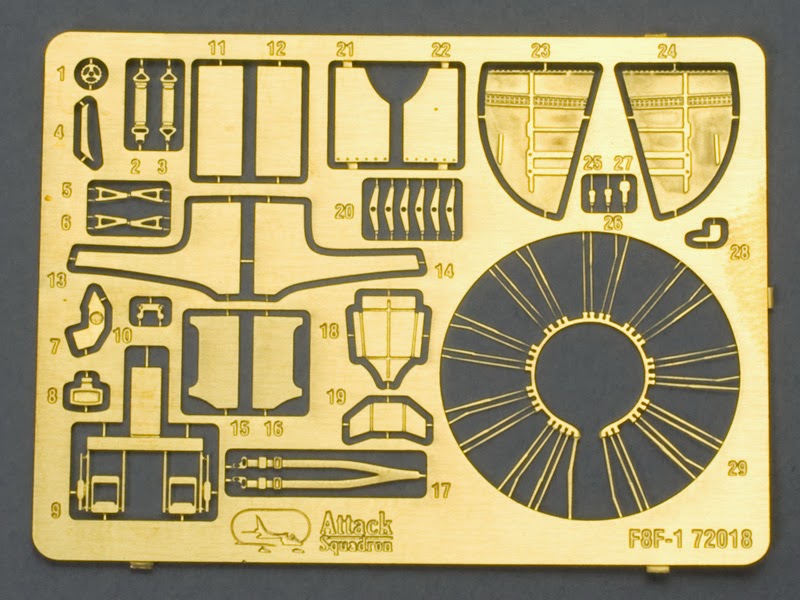 Regrettably, all three decal options have inaccuracies. Such situation, while excusable for model kits originating in 1980s and 1990s, is inexplicable in a kit released in 2014 and representing a well documented subject (which the Bearcat surely is).

Variant A:
1) There is an error in the pilot's name: the decal reads "CDR J.M. DRVANE", while it should be "CDR J.M. DEVANE".
2) The decal's tail code letter "A" has wrong proportions: the horizontal bar in "A" is placed too high.
3) Relative size of tail code letter ("A"), modex ("100") and national insignia on the decal are incorrect: one can clearly see on the photograph that the "Δ" in "A" is taller than the adjacent "0", and that the "0" is not as tall as the white star.

Variant B:
4) The unit coat of arms is represented rather poorly on the decal; it's left field should be sky blue, not green.
5) The central piece of the French roundel is sky blue on the decal, while on the photograph it is clearly of the same hue as the base camouflage coat, i.e. Sea Blue FS15042.

Variant C:
6) The unit coat of arms is not very accurately represented on the decal; there should be a black three-pronged staff instead of the yellow arrow, and the wings should be of slightly different shape.

4. Alternatives & Aftermarket
A comprehensive list of other F8F kits and aftermarket items can be found on the ScaleMates site: link.
I would venture to say, however, that most of the existing F8F aftermarket sets are irrelevant to the Attack Squadron's kit simply because they do not add any value to what you get out of the box in terms of either accuracy or detail level. The only thing you might want to add is an aftermarket engine. Here you have a choice: late-spec R-2800 engine sets have been released by Aires (# 7009), Vector (# 72006) and Pavla (# 72017).

5. Conclusion
Pro:
- High accuracy; no visible shortcomings in geometry.
- Extraordinary level of detail for a 1:72 scale kit; wheel wells, landing gear, cockpit and separate control surfaces are especially worth mentioning.
- Smooth surface, very fine panel and rivet lines.
- Innovative approach to parts breakdown that is supposed to allow doing away with much fitting and sanding.
- Vacu-formed canopy and photoetched metal parts included.
Contra:
- A number of fit issues, some of them casting doubt on the wisdom of the said innovative approach to parts breakdown.
- Inaccurate decal.
- Transparency of clear resin parts is mediocre, and the clear resin yellows with time.
- A couple of minor shortcomings, namely, less than excellent engine detail and shallow wing root air intakes.
- Not inconsiderable price (E45 in early 2014 at ArmaHobby.pl).

All in all, I believe the Attack Squadron's offer to be the best Bearcat kit that exists today in terms of accuracy and detail.